I absolutely love to hear people’s stories and the adversity they’ve had to overcome to achieve their goals. A few weeks ago I went to a networking event at a trendy location in Adelaide, South Australia. The speaker was a South African national called Mike Scott. Over a couple of hours, he unpackaged his challenges to establish a successful global software company. His main obstacles involved raising capital, finding reliable staff and securing clients worldwide. Fast forward a decade and he’s sold his business (at a very large profit) and is now an employee of the company that bought it. Another gentleman who recently shared his journey with me is Hakim El Kadiri.I last spoke with Hakim El Kadiri when he was ‘Head of Products’ for Rado Watches. Previously he was head of product management for Swatch Group subsidiaries Hamilton Watch and Endura AG. By any measure, this is a very impressive resume that most people would be envious of. However, this came to an abrupt halt shortly after our conversation. At the age of 56 during a pandemic, Hakim was dismissed from his job, underwent a knee operation and suffered a heart attack. These profound events were the catalyst for Hakim to change his life and completely reinvent himself. Impressively like a phoenix rising from the ashes he fulfilled a lifetime dream to establish a watch brand called Elka Watch & Co.When establishing a new brand it’s very important to have a good story. Interestingly Elka is Hakim El Kadiri’s nickname so it seemed like a natural choice. However, there was already a brand called Elka Watch (now defunct) that operated in the 60s & 70s and was named after Eduard Louis Kiek from Amsterdam. After extensive research, Hakim realised this historical brand had strong alliances with Ulysse Nardin, Heuer, Rolex and Minerva. This proved a fortuitous coincidence because it influenced the design of D series.Aesthetically the D series pays homage to a dial created by Ulysee Nardin for the original Dutch Elka Watch company. Within the range, there are three distinctive variants with Sunbrushed blue, grey and silver dials. These are complemented by rhodium indexes on the blue, grey versions and gold on the silver model. Overall the minimalistic composition is very effective and is bound to appeal to appreciators of exquisite dress watches. Beneath the refined façade is Swiss automatic movement manufactured by la Joux-Perret in la Chaux-de-Fonds. This mechanism comprises 24-jewels and oscillates at a frequency of 28,800 vibrations per hour. Functionally the timepiece features hours, minutes, seconds and a power reserve of 68-hours. As a perfect finale, the watches are presented on The Milanese mesh bracelets or leather straps. 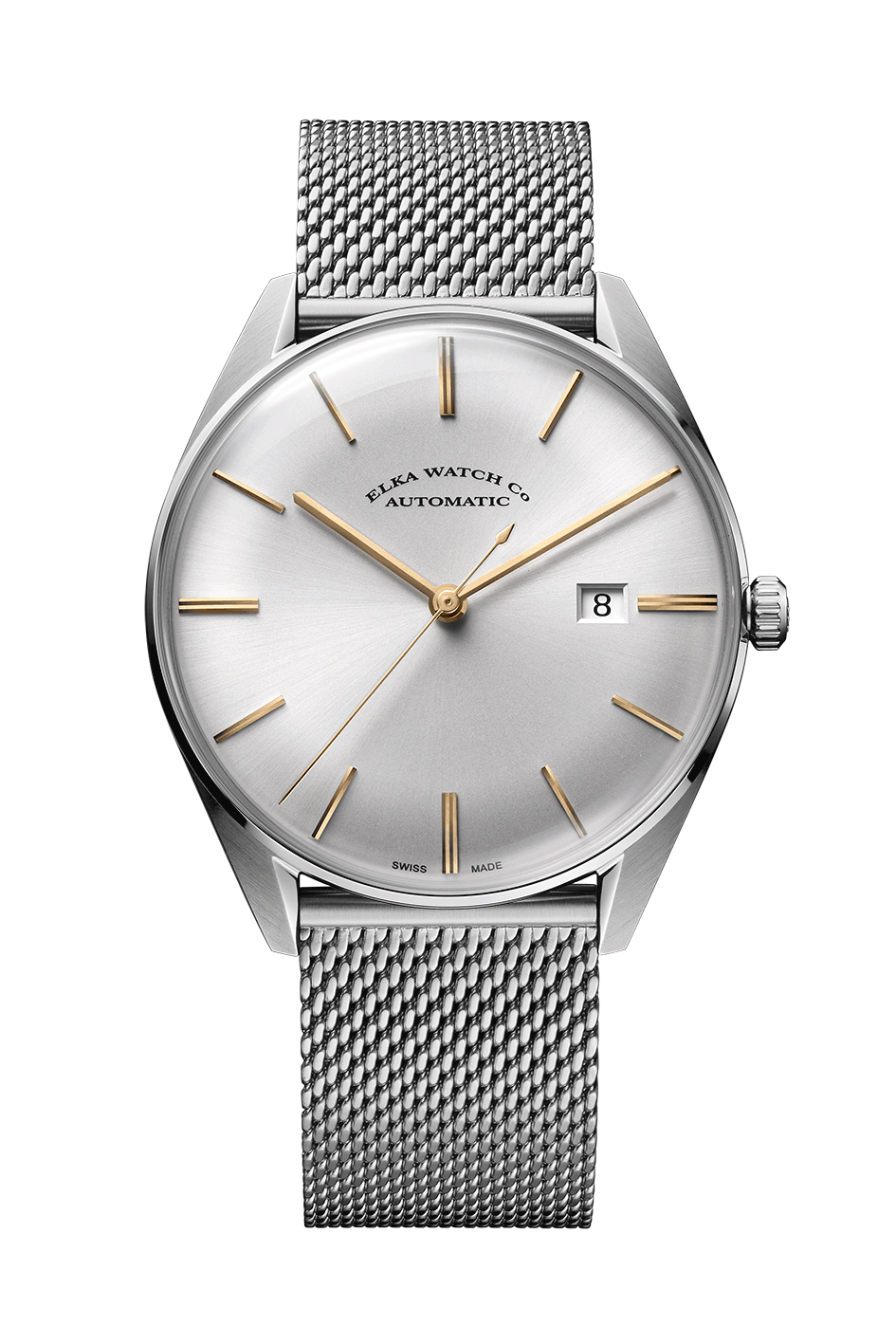